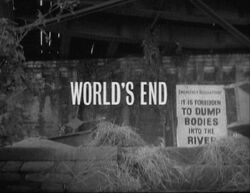 The Dalek Invasion of Earth is the second serial of the second season of Doctor Who. It was broadcast in six parts:

It has been released in various forms of media.

Users who have seen thisEdit

Retrieved from "https://doctor-who-collectors.fandom.com/wiki/The_Dalek_Invasion_of_Earth?oldid=141172"
Community content is available under CC-BY-SA unless otherwise noted.